How the Match Scoring Works

After each match every player gets a score for how well he or she played in that particular match.

Independently of the actual position (defense or offense) the player receives a defense score, an offense score, and a team score (if more than one player per team).

Team Score: Both players get a team score if they win. The team score is the goal difference with a multiplier.

To sum it up. To get the best possible score, try to shoot many goals, fast, and make your opponent score few goals against you and if he does, make sure it takes him some time.

How to setup Slack for Kicktrack Messages

If you are using Slack you are in for a treat. Kicktrack can send several messages to a slack channel of your choice. 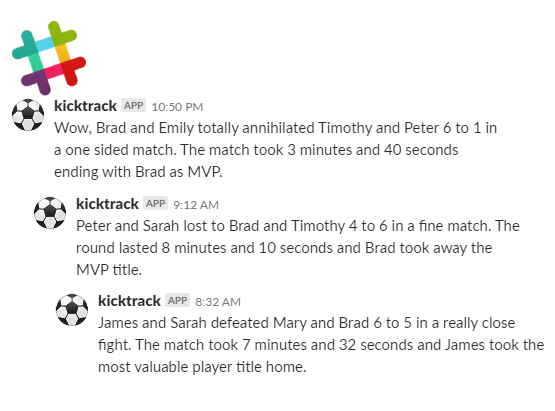 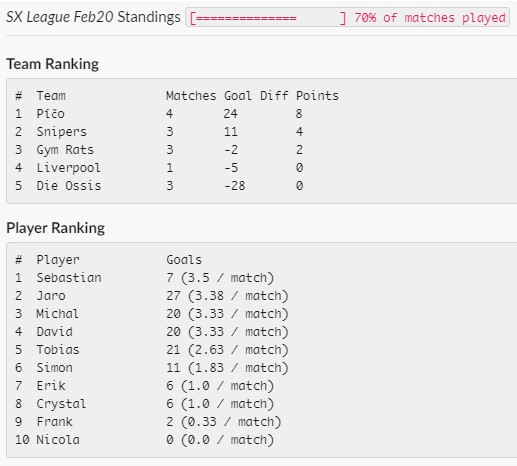 To set it up, simply follow the steps for custom webhooks explained by Slack (takes less than 2 minutes).

After that, simply take the webhook URL and put it in the "Slack Webhook URL" field in your settings.

How to setup NFC Game Starts

You can program your own NFC tags to start matches. Here's how:

The real fun begins if players get rewarded. We have a couple of 3D printable trophies. Feel free to download and print them with your own 3D printer or any online service of your choice.

Trophy 1: Player of the Week